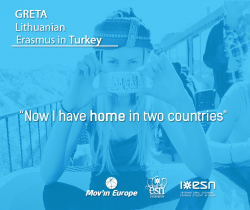 Erasmus in Antalya gave me way more than I expected. Five months passed too quickly and I couldn‘t believe it was over. I wouldn‘t find anything else to compare with my time spent in Turkey. Like what could be better than finding new friends, studying outside in a beautiful environment and eating the best ice cream in the world? It would be difficult to describe all the experience that I gain there, but I will try my best.

We lived in a small, cozy flat near Akdeniz University. The city itself was really different so when I had time, I was walking around and just getting „lost“ in the streets. In the end I knew lots of cool places and paths in Antalya. I guess even more than a random local would know. At first it was really strange to hear all the shoutings in the streets of  people trying to sell fresh vegetables, fruits or other stuff but later I understood that it is a great contrast in this country. I even got used of hearing Ezan (prays) several times in a day and it was like an interesting melody to my ears.

The people that I met there were as warm as the country. All the professors, ESN members and others showed us hospitality and helped us when we needed. I was inspired of their frankness and knowledge. And some of the people that I met during my stay in Antalya became as close as family members. Together we traveled, celebrated Christmas and birthdays, cooked, went to scuba diving lessons or just gathered to watch a movie. Now I know that I have a lot of people to visit and I am looking forward to meet them again.

What is more, I enjoyed every part of this programe. I met the culture, dishes, tried to learn the language. To shorten it up, I just tried to feel what is it like to live here and be a part of this community. By doing this, I have not only met Turkish traditions, but showed mine as well.

From my point of view, Erasmus is able to change your personality, it develops your skills and confidence. I realised that the world is not as big as I imagined, that everything is possible if you just stick to your plan. If I would have one more opportunity to go there, I would go there without any doubt.