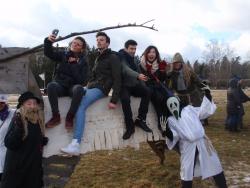 The facts about the festival: Užgavėnės begins on the night before Ash Wednesday, when an effigy of winter (usually named Morė) is burnt. A major element of the holiday, meant to symbolize the defeat of winter in the Northern Hemisphere, is a staged battle between Lašininis ("porky") personifying winter and Kanapinis ("hempen man") personifying spring. Devils, witches, goats, the grim reaper, gypsies, and other joyful and frightening characters appear in costumes during the celebrations. The participants and masqueraders dance and eat the traditional dish of the holiday - pancakes with a variety of toppings. In Lithuania's capital Vilnius, the celebration takes place on Gediminas Avenue, as well as at many youth organizations. The festival is a major event at Rumšiškės open-air ethnographic museum.

This time as you know it happened in Rumsiskes on 25th of February. I have been there for quite a long time and saw lots of interesting things, like people are wearing such as amazing clothes of goats, witches. Also, there were a big number of houses where people were cooking some national food and a lot of pancakes. What could I say about the food that I have tried, just no words to share my feelings, you need to taste it yourselves.

The atmosphere in the museum was great, it was a bit cold for Lithuanian people, but for foreigners who are from warm countries, it was freezing as they shared their experience.

A bit about the festival, it is a really way of relaxing, as there were some interesting games and activities such as wooden leg walking, going back to the past and taking a photo to show your friends. They were something.

For those who didn’t visit it, I strongly advise to do it next time! Here are some photos of the festival. Have a good weekend! 25.02.2017