A visit to the Ninth Fort museum 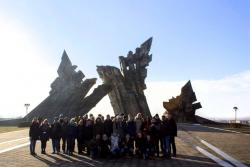 In the late morning of 8th of February exchange students and ESN’ers were gathering in the lobby of Baltija ready for the new excursion although the memories from the last trip to Vilnius and Trakai were still alive. This time the destination of the trip was much closer – The Ninth Fort museum which brought us a few hundred years forward from the nostalgic Middle Ages to times which was not so romantic.

As we arrived to the place by crowded bus, we quickly went to the museum where we were welcomed by the guide who conducted more than two hours lasting but not boring at all tour. Lithuania’s occupations history was presented for foreign students while Lithuanians had an opportunity to remember and to deepen their knowledge with the help of authentic exhibits: contracts and pictures from that times which were put under the glass. Remembering specific period of time or event one exposition followed another one: soviet terror and mass exile to Siberia, Nazi occupation, exile to Stutthof concentration camp, R. Kalanta’s self-immolation in the name of freedom for Lithuania. Neither foreign students nor Lithuanians were bored – everybody was trying to see exhibits by themselves and to make everything clear.

After the first part of excursion we went outside and noticed that it was warmer than inside. After a short break we continued our tour. The second part of The Ninth Fort exposition was waiting for us. Having passed the little yard of the fort we saw a dark and uncomfortable meetings’ room and we entered lodgment of the forth which was also not very hospitable. This place had a lot of purposes during the time: barracks, prison, death camp and finally – a museum. Here we heard even more lurid story of the forth. We had an opportunity to see the living conditions for politic prisoners who were kept here and we just could rhetorically think how long it is possible to live in such conditions. One thing is absolutely clear – the word “resort” will have two different meaning since now.

Finally we had a walk in the catacombs and defence wall of the forth. Despite the fact that we still were inside, the walk let us lose negative emotions. Guide speech was coming to the end and we literally saw the light in the end of the tunnel. After the excursion we could enjoy spring-like sunshine which was like a symbol that everything has a happy ending. After a group photo next to the grand monument of The Ninth Fort we came back home with wet feet, cold hands but a lot of impressions and the smile in the face.

Check Yasin Hamarat photos from the excursion below.