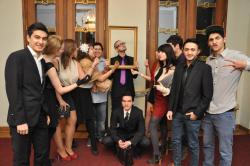 December must be one of the saddest months of Erasmus period. It’s the time of the year when emotional goodbyes are being said, bags are being packed and the university becomes more or less empty. This year ESN VMU together with the International Office wanted to see their students off with style and with a little help from their mutual friend Mr. Gatsby  they took students back to the Roaring 1920s. All this happened within the very walls of Gatsby’s mansion which he was kind enough to lend us for a night. How about we start from the beginning, shall we?

Looking like two golden-age Hollywood film stars, our hosts of the evening welcomed everyone and officially opened the night. The opening words were shared by our beloved ESN VMU president Roberta, who expressed her deepest regrets that Mr. Gatsby is on a cruise somewhere in the Atlantic Ocean with Kate Winslet and probably will not make it on time to the party. On behalf of all the members of ESN VMU, Roberta thanked the students for the entire semester and invited to enjoy the evening that belonged to them. Continuing with the speeches, the head of the Student Affairs Office Mantas Simanavičius greeted the students and wished for a safe trip back home.

Throughout the night students were asked to write Christmas wishes and put them into the special mail box. Later they will be distributed to the addressees by our Santa’s little helpers. And while the rest of the party enjoyed a short break by tasting the food, writing the wishes, enjoying each other’s company and taking tons of pictures in our self-built photo corner the keen eyes of the judges searched through the crowd for the best dressed couple. Not so long after they announced the winners who looked quite overwhelmed by this honor. The “Best Dressed” title went to our lovely French Marie and Maxime. Round of applause!

The awards did not end here. International Office did not forget anyone worth remembering. From ESNers to mentors for all of the incredible work they have done and from the most creative to the most active international students for participating in our events.

Everyone seemed to be enjoying this glamorous moment, leaving everything about tomorrow behind them. Seems like everyone came to Gatsby's from the students to head of the departments and faculty deans but still, one more special treat was waiting for the audience. While Konstantin from Russia was giving his thank you speech, the backstage was sizzling with excitement – members of the ESN were preparing for their closing dance number. The lights were dimmed, music started playing and a dozen of ESNers were welcomed to the stage by the deafening cheers of the audience.

By the time this article goes public the majority of you will be safe and sound in your home countries. We want you to know, that you will never be forgotten. We salute and thank to each of you for the incredible time we had together!

Special thanks goes to “Kauno įgulos karininkų ramovė“ for the magnificent place we were given for this event. When you are in Kaunas drop by A.Mickevičiaus str. 19 and visit this archaic place which is breathing with history.